Other people tell me they fly or they want to have the flying dream.

I’m high above someplace. Sometimes over a city, the streets below just strips of thread, the pinnacles of building just flat shapes lined in light. Or I’m just above the ocean, a few feet up from the waves, the wind moving them by at a slant beneath me. I stretch out like a kid on his belly on the carpet. I rest my head on my arms to watch the waters below me. The light is in the blue and on the blue and everything is in motion but me.

But most often, I hover in a place I’ve never been, never seen except on the vids.

Just above the wide rim of atmosphere, my arms held out like a kid treading water. Over the lit up planet, round and whole, I hover.

Mom says it’s a memory; my Uncle declares this impossible every time she says it. But he’s not there when I wake up in a sweat, yelling, and she’s already in the room parting the hair on the top of my head like feathers and whispering to me.

Because that’s what we did.

The trajectory was wrong. Two less days of air than we thought. So they jettisoned the pods and we plummeted to the planet. Some lit up like stars as they fell, never made it down. And all that time, that shuddering drop through fire into air, I never woke up in my mother’s arms.

Have they told me this story so many times that my mind drew it in like water and grew it into the roots of who I am, or do I really, each time, remember? 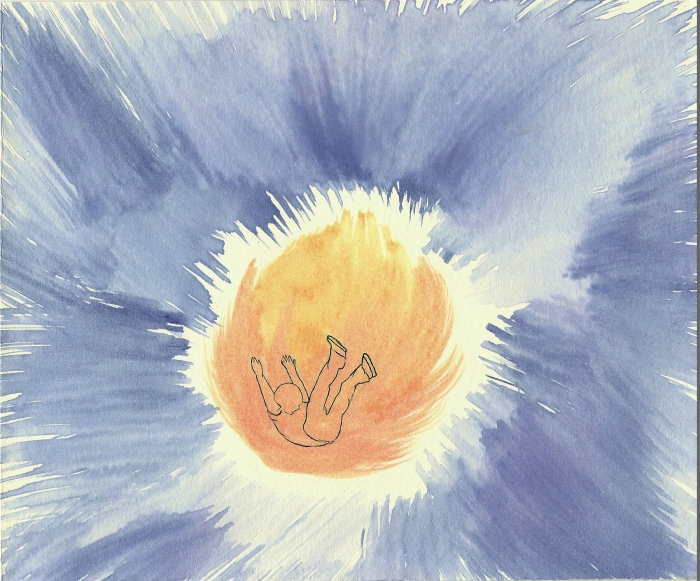